Your poverty-shaming is not going to get me off government assistance.

Many of you may remember the post about the Five-Part Spectrum of characters. In that, we mentioned the Sympathetic Villain and used the Marvel Cinematic Universe‘s Loki for that example. In celebration of the Thor 2: The Dark World being released, let’s take a closer look at what makes Loki a Sympathetic Villain throughout the three films he has been in. 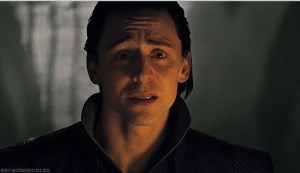 In Thor, we meet Loki as the eponymous hero’s little brother. He is very much the proverbial ‘spare’ to Thor’s ‘heir’ in their father’s eyes. Odin, the King of Asgard and their father, is not alone in showing favoritism to Thor. All of their friends seem to ‘put up’ with Loki because he is Thor’s brother.

And then the truth is revealed. In the photo above, Loki has just discovered from Odin that he is not only not REALLY Odin’s son, but he is not…

I can get down with this.

According to the Merriam-Webster online dictionary entry, the definition of an anti-hero is

Antihero- a main character in a book, play, movie, etc., who does not have the usual good qualities that are expected in a hero;